Before I say one more word, I’d like to officially take the pledge found on Dan Savage’s It Gets Better website:

Everyone deserves to be respected for who they are. I pledge to spread this message to my friends, family and neighbors. I’ll speak up against hate and intolerance whenever I see it, at school and at work. I’ll provide hope for lesbian, gay, bi, trans and other bullied teens by letting them know that “It Gets Better.”

Hopefully it counts, even though I’m a conservative.

Right now, at this moment, I should be studying for finals. I should be writing a paper. I should be finishing a research project. I should be finalizing my bar application, or memorizing my commencement speech, or maybe even getting 5 or 6 hours of sleep. Yet here I sit, staring at the walls and listening to this video with a broken heart:

Dan, you talk an awful lot of trash for someone so opposed to intolerance.

On Sunday, Savage made an attempt at apologizing for bullying the children who chose to walk out on his speech. Since he apologized for calling a group of children pansy-asses, I’ve chosen to apologize for a few comments I myself recently made about Savage:

It was wrong for me to post these things, and I apologize for doing it. Had I let it stand, what I said in those posts would have cheapened everything I feel about what happened to the kids Savage targeted with his hateful words.

I’m not here for the “doesn’t Dan Savage advocate against bullying?” attack–Jimmy LaSalvia already hit the nail on the head with GOProud’s response to Savage’s remarks:

This man was allowed a bully pulpit to address a room full of impressionable children. This is the outrage. This is the scandal. Who associated with the National Scholastic Press Association and/or the Journalism Education Assocation is responsible for inviting a man who makes a living pontificating on the follies of “the fuckable world” to speak to a captive audience full of high school journalists? We’ve been dealing with Dan Savage’s word vomit for years, now. We’ve known who he is, what he believes, and what he believes is and is not acceptable activism. 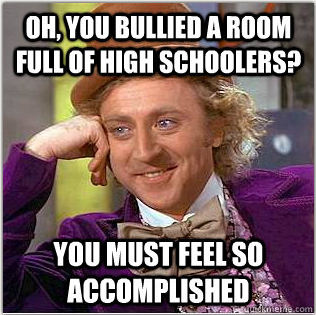 The pledge I posed at the beginning is a promise:
I will do more than speak up against hate and intolerance–I will fight against it with every fiber of my being.

I will do more than provide hope for lesbian, gay, bi, trans, and other bullied teens–I will joyfully offer love, open arms, and protection from harm.

I will do more than let someone who is suffering emotionally or physically know that it gets better–I will help make it better.

Keeping that promise means sticking up for those kids, and speaking out against Dan Savage–and anyone who breathed an “amen” after hearing what he said, because no one deserves to be humiliated in front of their peers, or made to feel small and stupid and low because of what they believe.

Not even Dan Savage.